How to Avoid Overwatering Your Lawn

One of the big mistakes new homeowners make in their lawn maintenance routine is overwatering their grass. When somebody is dealing with an irrigation system for a piece of property for the first time, there seems to be a misconception that as long as the property isn’t visibly flooding, there’s no such thing as overwatering.

One of the big mistakes new homeowners make in their lawn maintenance routine is overwatering their grass. When somebody is dealing with an irrigation system for a piece of property for the first time, there seems to be a misconception that as long as the property isn’t visibly flooding, there’s no such thing as overwatering.

After all, the water just goes in the ground right?

Unfortunately, this isn’t the case and it’s quite easy to overwater your lawn, especially if you’re inexperienced with owning a sprinkler system. Some estimates say that lawns receive up to three times as much water as they actually need.

Basically, it’s possible to “drown” your grass out. Water isn’t the only key to a healthy lawn, as the grass– as a living being– needs oxygen from the air to grow as well. By oversaturating the grass’ roots with water, you’re preventing the roots from taking in oxygen, which is going to stunt the growth of the entire property.

This doesn’t even account for some of the other problems that overwatering can cause, such as an increase in the amount of weeds growing and shallow roots which can be more easily roughed up by foot traffic and be vulnerable to permanent damage from insects.

So how do you know when enough water is enough? The key is consistent observation and analysis.

By understanding how much water your soil actually absorbs, you can make an adjustment to your sprinkler clock so it can shut down before you start overwatering your grass.

Take notes on how long into your irrigation cycle it takes before water starts forming on top of the soil. When this is happening, your roots are going to be suffocating, which will lead to some of the issues that were previously mentioned.

And while it might seem obvious, a common overwatering issue is simply not shutting off an automated irrigation system right before a rainstorm. Since nature is doing your watering for you, you don’t need to have your sprinkler system active. But many homeowners forget that they actually use automated sprinkler clocks and end up seriously overwatering their grass.

By volume, using sprinklers during a rainstorm leads to the greatest amount of overwatering and can often create long term problems for your lawn.

Not to mention, avoiding overwatering saves money as well. Less wasted water coming out of your irrigation system will be reflected in your water bill.

As always, be sure to consult with an experienced, reputable irrigation company in your area to make sure you’re being cost-efficient with your watering and doing everything you can to keep your grass healthy and properly watered.

How To Reduce the Water Usage of Your Sprinkler System

Share to RedditFor an accurate appraisal you should contact an appraiser or a real estate agent. In many cases, a well designed and properly installed

When Should I Turn My Sprinklers Off?

With summer on its way out and fall approaching at an alarming rate, one of the most common questions homeowners are asking is, “when should

Are My Sprinkler Heads Too Old?

Much like a car or the exterior of a house, your irrigation system will require regular maintenance to prevent a disaster or dead grass before

Send Us A Message

PrevPreviousThe Myths About Winterization
NextAre My Sprinkler Heads Too Old?Next

Get A Free Consultation
And Estimate 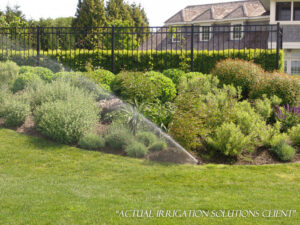